Bandai's Mobile Doll May from "Gundam Build Divers Re:RISE" has landed! Her beam saber and beam shield are both included in this highly articulated figure, allowing for action-packed poses! Three facial expression plates are also included.

You can rearrange the MS state where Mei is on board in GBN and the real appearance of May!

The beam handgun suspended on the thigh can be held in both hands to reproduce the battle scene! 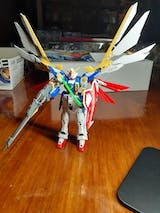